Home › the one and twenty › Twilight: 2000 by Free League—The Post-WWIII Apocalypse Never Looked so Good 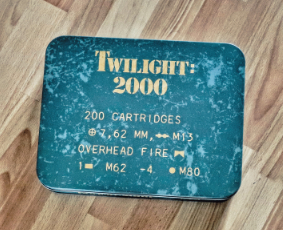 The new Kickstarter-funded edition of the legendary tabletop/pen-&-paper role-playing game Twilight:2000, from the Swedish publisher Free League, is absolutely gorgeous and worth every penny of its price.

Together with Mike Pondsmith’s Cyberpunk 2020 and Frank Chadwick et al.’s 2300 AD, Twilight: 2000—also by Frank Chadwick et al.—is among the best and most beautifully immersive non-fantasy role-playing games ever created. Yet, will I ever play this marvelous game again, as a player or perhaps even gamemaster? I don’t know! But that’s not the point.

Because I already played it for about sixteen years.

Yes, that’s right. Sixteen years! By-weekly, breaks and sabbaticals notwithstanding. With the same player character, a steady—at times expanding, at times contracting—set of players with their player characters, led by the same gamemaster along these many years.

It was the best of times, it was the worst of times. For our characters, particularly the latter.

We played with heavily modified rules, each of which made life a lot harder. The most essential modification affected damage values. In the original T2K rules, leaving aside range or armor modifiers, each weapon had a D6 damage value. A regular pistol inflicted 1D6 hit points, an M16 3D6 hit points, and so on. With our house rules, as insidiously modified by our evil gamemaster, these results were merely the base throw for D6 hit points. Thus, a pistol would deal 1D6 x D6 damage instead, an M16 3D6 x D6 damage, and so on—while character health points remained at their original levels. Boy, rarely were we not seriously or even critically injured! We were also perpetually short on everything except enemies, fighting off warlords, wolves, marauders, hunger, rabies, rogue NATO troops, Warsaw Pact regulars, and the best weapon in the enemy’s arsenal, our own (player character) gunship pilot. You have no idea.

It was this shift in the status of the player characters from nearly invincible heroes to ever-cautious survivors that—together with the gamemaster’s talents, the players’ relentless focus, and other important contexts and details—turned the game into such an intense, long-lasting, and at times even life-changing experience and catalyst for personal growth.

Sixteen years. In-game time: two months, three at most. (I need to check.) Once, playing a single in-game day took us an entire year.

We didn’t even get out of Europe.

The war was lost. Our characters hit Bremerhaven too late and missed the fleet—the last ships had left a few weeks ago, shipping home all the remaining U.S. troops who had made it in time. Will our player characters ever find their way home? Stay tuned!

Our characters would certainly have found a way, right after solving and surviving some hair-raising spook operation in Bremerhaven. Working for the DIA has its advantages, provided these advantages actually materialize along these jobs’ far more numerous downsides.

The point being: I’ve been there, all the way from Kalisz to Bremerhaven. I don’t think I want to go down that road again with a different character. But I wanted this box! I wanted it as a memory box, a treasure trove, a condensed reminder of everything we experienced. A diorama that I can travel through at leisure in front of my mental fire place, perhaps from the vantage point of my player character who did make it home after all, and tells his kids how the world has come to be the way it is.

All images by J. Martin (12/2021) are licensed under a Creative Commons Attribution-Noncommercial-ShareAlike 4.0 International License.