Home › the one and twenty › “Interviewing for Game Design” Revisited 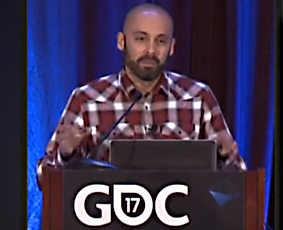 The day before yesterday, this year’s traditional post-internship panel took place at my university, organized and moderated by game design students who’ve wrapped up their internships, to share their experiences with their advisors and fellow students.

At one point, the topic of job interviews popped up, and with it the inevitable reference to Richard Carrillo’s 2017 GDC talk on “Interviewing for Game Design.”

I’ve always been rather dissatisfied with this talk even though there’s nothing wrong with its general trajectory—all the terrible interview questions Carrillo dissects are indeed terrible, and the kind of questions he proposes would be a huge step forward in the right direction.

What’s been bothering me, after I looked into it more thoroughly, is the invisible corporate lens under which he examines his topic, an additional lens beyond the obvious corporate perspective of conducting job interviews. (Duh.)

Here’s what’s at the core of my reservations. In his principle example for a good interview question, a hypothetical game director approaches a hypothetical game designer with the request to remove one of the three elements of the rock-paper-scissors mechanic, and now the candidate has to come up with a reaction to it. And the first reaction of the candidate, to ask the game director why they would want them to do that, is labeled as “bad answer.”

Three huge red flags here. First, the industry trope of the idiot superior (or idiot client channeled by the idiot superior) is established or invigorated right away in the candidate’s mind for automated future confrontational resentment. And not only that—if things go wrong during a project, especially in corporate environments with divisional organizations, people already tend to attribute the inevitable mistakes, misunderstandings, and mix-ups either to stupidity or malicious intent, a dynamic experienced producers/project managers/scrum masters know very well. Cementing the trope of the idiot superior/client is an excellent strategy to create more problems down the road instead of less.

Then, to ask why they want to have one element removed must of course be wrong because the interviewer hasn’t created an interesting rationale for this hypothetical—which is about as sloppy and inattentive as all the bad interview questions it’s meant to replace. On the surface, the candidate isn’t supposed to question it because rationales supposedly “don’t matter” in this hypothetical. But even in purely hypothetical situations, reasons do matter! If a client wants something outrageously unadvised or even impossible from you, and you don’t even inquire what their rationale is and what they really want or think they want, then you’re not doing what you’re supposed to be doing, which is to provide advice to the client to the best of your ability. And while corporate environments are indeed notorious for this kind of attitude, i.e., to disincentivize scrutiny and questioning, there’s no reason why we should further cement this attitude and keep everything as terrible as it is. What if the superior’s request had actually been clever, perhaps a provocative “let’s think outside the box” moment, for example? Instead, Carrillo improvises a “too much complexity” rationale for his idiot game director to sort-of answer this question, on the basis of which he can then discard an interesting alternative to the RPS mechanic he himself comes up with.

Finally, and this is very intimately connected to the previous two points, there’s Carrillo’s statement that a game designer is not supposed to create ideas but to provide solutions. Yes, well—this isn’t wrong. But it’s not wrong in the sense that it’s not even wrong, even if we leave aside the most obvious objections. Like, that game designers are generally supposed to come up with game ideas in the first place; that many studios, including publisher-owned studios, provide opportunities for their own staff to pitch their game ideas; that you will be in need of bold ideas and daring course corrections often enough if you’re developing anything fresh and untested that’s not the seventeenth sequel of your well-established franchise. No, what’s not even wrong here is the mindset that providing solutions and creating ideas are viewed as different things—which is, of course, among the most corporate attitudes one can imagine.

To wrap it up, Richard Carrillo is absolutely right that interview questions for game designers are overwhelmingly sloppy and terrible; that they should be deliberate and precise instead; and that they should be designed to generate interesting answers that can be more objectively evaluated. But to remove the invisible lens of toxic corporate dynamics from these valuable and necessary considerations, that would make these considerations even more valuable and necessary.