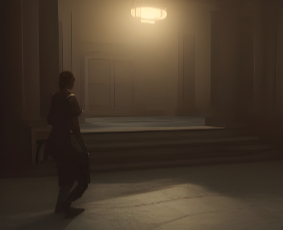 The God of Dung Fire

There are some powerful AI-driven image generators out there, but the results might not always be as expected.

Yesterday, I came across this tweet about an “article-to-featured-image” tool by Stock AI, which promises to turn your article into a cover image: “Simply paste your article and we’ll create a featured image for you!” Seemingly to combat spam (we’ll get back to that), I had to sign in with my Google account. While the tool had worked great for the tweeted example, the results for three blog posts I’d written for my Voidpunk blog were rather puzzling:

As a final try, I fed Stock AI with my Blizzard-related rant on “The God of Blazing Dung Fires” from this here blog, and it returned this intriguing image. Again, it’s embedded into an engine or editor interface, in turn embedded into an OS interface, and the figure seems almost, but not fully, human. I like it! In the context of Stock AI’s “article to featured image” promise, however, all of them were outright failures, this one included.

Then I realized I had copied and pasted the posts without their headlines, and I was curious if that would make a difference. Yet, when I tried to create an image for a post with the headline included, oh, surprise! It returned an “Upgrade to premium to use this feature” pop-up, and that was all it returned forever after, headline or no.

Stock AI, it turned out, doesn’t tell you about the maximum of four tries before you have to cough up. Also, it tricks you into signing in with your Google account under false pretenses. Plus, the results are useless, measured against its pompous promise.

So what does this teach us? For AI-generated images, don’t follow that guy with the candy bar into their van!

For the second option, you have to jump through a few technical hoops. But if you really want to get an idea what such engines can and cannot do, or soon will be able to do, you should give it a try. What’s more, there will almost certainly be exciting improvements down the road, and you might want to experience them firsthand.

Will these tools “make graphic designers and artists obsolete?” No. I think that’s just another poopocalyptic tech-bubble fantasy. But I do think that AI-driven design will become an absolute killer tool that graphic designers will, want, and must work with in the acutely foreseeable future, and that these tools will soon be integrated into the very apps and engines we already work with.