Home › the one and twenty › The (In)Famous Encumbrance Modifier 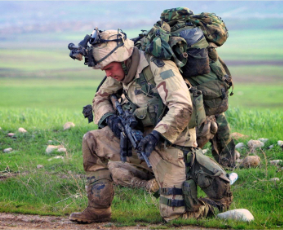 Let me just pick up this daisy

So who’s right, and who’s wrong?

The answer is, neither position is very productive. But let me step back a little. Where do encumbrance rules, or rather modifiers, come from?

They come, of course, from pen-&-paper role-playing games. There, they often make a lot of sense, and they’re often well-thought-out and don’t kick in all at once to render you immobile when you pick up that one last daisy. For my first RPG system (I’m working on a brand-new one, as a topic for another day), I took a lesson from Twilight 2000 to create encumbrance modifiers that were:

That went a long way in making the gameplay more realistic—so that design argument seems to hold water. But the more important point is, neither in my game nor in Twilight 2000 was grabbing and amassing as much loot as possible part of the core playing experience. Players could try that, of course, but the gameplay wouldn’t support that by sending loot down the sky at every corner.

And that’s where the problem lies with encumbrance modifiers in many video games:

This “encumbrance” mechanism is not usable in a world where the socially understood “fun” of RPGs/adventure games is in “loot dropping everywhere.” If you want encumbrance to work, the basic relationship between the player and “items” has to change. —@keithburgun

In this tweet and in his follow-up tweet, Keith Burung refers to Luke Winkie’s article “Encumbrance Sucks, So Why Is It Still so Common?” in PC Gamer. That article touches the usual bases, from how these rules spoil the fun, how they are badly balanced and/or badly implemented, and why game designers think they’re doing it right in terms of realism, immersion, and so on.

But what the article doesn’t touch upon, and here’s where Keith Burung’s tweets are spot-on, is the root problem: how can you expect to make games which are heavily focused on “who dies with the most toys wins” make more enjoyable by curtailing the amount of toys players are able to collect?

This encumbrance controversy is merely a symptom for a deeper problem, namely, reward structures in RPGs and adventure/action-adventure games. Tynan Sylvester wrote about it in Designing Games: A Guide to Engineering Experiences (Sebastopol: O’Reilly, 2013. 212–13), and I wrote about it at length in Ludotronics. There, I pushed toward “reward alignment” strategies where different types of rewards are attached to different types of development arcs (plot development, character development, and player development).

Yet, let’s save reward structures for another post to keep this one snappy. The gist of it is, not only in the case of encumbrance, if your players’ expectations can’t be aligned with your design expectations, it might be that the game type’s “ideology” is at fault in the Foucauldian sense—when a cultural practice has become so transparent and so invisible to us as a cultural practice that it appears to be perfectly natural and part of the cosmos.