Home › collateral tales › Ludotronics: Coming Soon to a Bookstore Near You!

Ludotronics: Coming Soon to a Bookstore Near You! 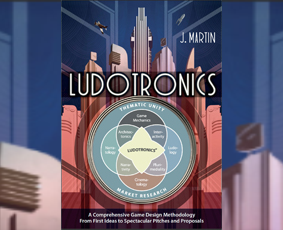 About a hundred years ago in March 2019—some of yer olden folks might still remember that—I published my book The Ludotronics Game Design Methodology: From First Ideas to Spectacular Pitches and Proposals.

My plan back then was to self-publish Ludotronics as a first step, then pitch an edited and extended version of it to a publisher about three years later.

The reason was that I wanted to sell my first edition as a regular book on the one hand, which I did together with DriveThruRPG, but keep its original content free and shareable with a Creative Commons CC-BY-NC-SA 4.0 license on the other.

April this year, after some preliminary talks, I submitted a proposal to CRC-Press. It then passed through the review process and the publishing committee, and the contract was signed on May 5. And it’s great! There’s not one thing I could complain about. The deadline’s also very generous, so it doesn’t keep me from pushing my academic and creative projects forward as well.

Thus, right after my academic hell-on-earth phase had subsided on May 15, I charted out a schedule and went to work. Editing, for sure, but also sharpening and pruning—some parts didn’t check out in practice as well as I thought. Plus, I need some space for a secret level! (That’s what the “extended” part of the second edition is about.)

To conclude, the book will come out next year, in 2023, and I’m happy and thrilled. With the publisher, the contract, and the kind of work attached to it that I love.