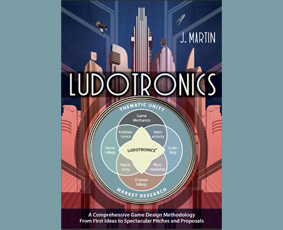 In my game design textbook Ludotronics, I sometimes use different, less well-known terminology for specific reasons.

One of these less well-known terms I use is “interactive narrative” instead of “interactive storytelling.” I don’t have anything against telling stories, mind, or making stories interactive! Many great games exist that do exactly that! Yet, I think there are problems involved with this term that make it hard to break out of our addiction to cutscenes.

I think it was Chris Crawford who once quipped that “if you have a story, it’s no longer interactive,” but I can’t find the reference. Now, he certainly wrote many articles and books about interactive storytelling, so that needs some interpretation. In my own words, what Crawford always tried to accomplish was to create games and game mechanics that allow the player to interact with the story, not just interact with specific, actionable events within that story.

If you can only interact with a story’s actionable events, then you get games like—among many, many others—Uncharted, Tomb Raider, or Syberia. They’re great! I love them! But they’re not interactive stories. They’re stories that feature interactive events.

Now, while the technology to create “true” interactive stories doesn’t yet exist, there are also many games that use clever tinkering under the hood to make parts, and even large parts, of their stories truly interactive. Which, if well executed, creates unique player narratives around the basic story or main story line. Two outstanding examples, certainly, are the Mass Effect trilogy and The Witcher 3: Wild Hunt. And especially the latter noticeably adopted the term “interactive narrative” over interactive storytelling (this presentation is a good example).

The term as such isn’t new. It’s been used, for example, by Mark Stephen Meadows in Pause and Effect, Marie-Laure Ryan in “Interactive Narrative, Plot Types, and Interpersonal Relations”, or Tynan Sylvester in Designing Games. There are several reasons why I think this term should be used instead of “interactive storytelling.” Here’s a selection:

Certainly, these differences are not as sharply and exclusively distributed; there’s a lot of overlap. Still, these are different design paradigms. Along the paradigm of interactive storytelling, game designers traditionally focus on balancing, i.e., balancing story and gameplay. Along the paradigm of interactive narrative, the focus is rather on integrating the game’s development arcs (player, character, story).

Yet, it’s a different mind set. And, especially early on during the concept development process, it’s your mind set that guides your design decisions.