Home › the one and twenty › Procedurally Generated Interactive Storytelling 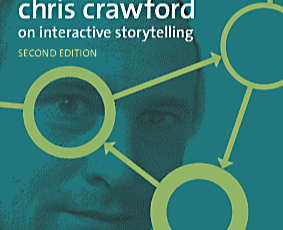 Last week, in my post on Interactive Narrative vs. Interactive Storytelling, I quoted Chris Crawford from memory as I couldn’t find the source.

Remember, there’s no such thing as an interactive story; if it’s already a story, then it has been nailed down and you can’t interact with it.

(I’m pretty sure that this quote was already in the 2004 edition, and in this form, but I’m not completely sure.)

The context is also interesting. It’s about his efforts to build a machine that creates procedurally generated stories. His principal idea to get it to work was a particular kind of abstraction that took specific details out of the equation on the one hand, but didn’t turn everything into generic mush on the other.

As usual, Star Wars became the example of choice, where he presents three versions of its plot. The first is a detailed account of what happened in Star Wars, the third the generic breakdown to “A boy confronts the challenge of growing up to become a man. He faces many difficulties, but ultimately triumphs over adversity and establishes his manhood.”

It is the second version, in between, where he sees the most potential:

A young man ventures out into the world, makes new friends, and experiences many adventures. He learns much and triumphs over adversity, winning the admiration of a pretty girl.

(Mind that Crawford is an industry dinosaur; in his later books, you can almost literally see his editors at work, trying hard—and often failing—to broaden a restricted field of view that perceives only those players and game designers that happen to be male.)

He goes on to say that there’s only one way to tell the first version, and that there are millions of ways to tell the third version. The second version, in contrast, can generate thousands of stories, and this is the version you want to feed as the “storyworld” to your story machine for procedural story/plot generation.

Thus, for a game to remain interactive, you create not a story but a storyworld, and let the machine do the plotting contingent on player input and player actions.

Suffice it to say, it didn’t work out, and the project failed. Strip out the details, and stories are no longer interesting. Also, there were technical problems.

Thus, I found it perplexing when Ken Levine, at his GDC Talk in 2014, announced his plans to create procedurally generated stories along a very similar approach. I was also perplexed that he seemed blissfully unaware of the fact that all this was, seriously, a very old hat.

What I didn’t find perplexing, I should add, is that he seems to have failed miserably. As did Chris Crawford—but Crawford didn’t throw a studio under the bus for his aspirations. Instead, he took his sword and attacked the dragon on his own.