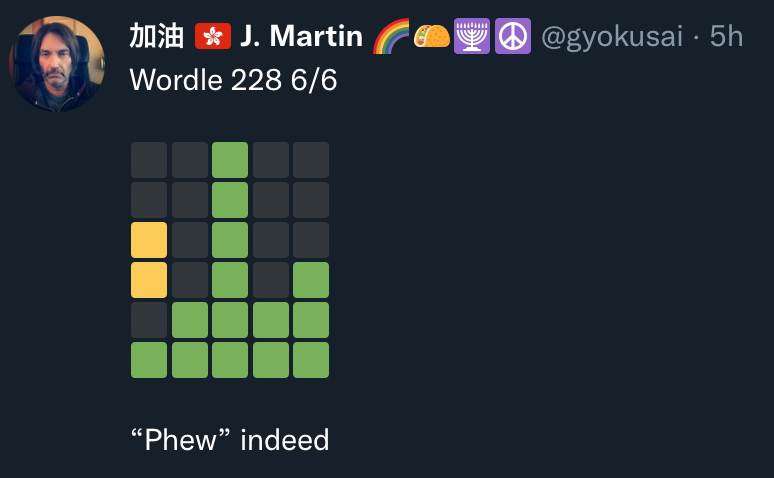 During the last weeks, I put up two linked-list items about Wordle on my secret level just drafts.

First, there’s a Wordle version now for Japanese kana that you can play online on github. You have to guess a word made out of 4 hiragana characters (that’s about twice the number of letters in the Latin alphabet) in 12 guesses (that’s twice the number of guesses in the Latin Wordle edition). Interestingly, this kana version was too easy at first—which put native speakers with a large active vocabulary actually at a disadvantage! But the developer of the kana version took heed and included words from higher difficulty levels, which made this version more enjoyable.

Then, if you’re even more into Japanese than that, there’s also a kanji version from hell—where you have to guess 4 radicals for a 2 kanji–expression. It’s totally awesome, but way beyond what I can manage. The native speakers I know, though, seem to love it! Here’s a little clip that demonstrates how it works along several examples.

Also, there’s الوِرد (AlWird), an Arabic version! Is there a Hebrew version? Of course there is, called מדויקת (Meduyeket). (Sadly, it leaves out the five sofit characters, I don’t know why.) I haven’t tried it out yet for the simple reason that I found it just this instant! And now I also realize that װערטל (Vertl) exists, a Yiddish version. (Against which, alas, my *cough* active *cough* vocabulary will positively crash and burn.)

Moreover, if you want to learn a bit more about Wordle’s mechanics and principles, there’s Ian Bogost’s “I Figured Out Wordle’s Secret—It took me four guesses” in the Atlantic. It’s an enjoyable read.

Finally, as you might have heard, Wordle has just been acquired by the New York Times. Now, you might ask why a newspaper would want to buy a puzzle game, but what you should realize is that newspapers have been in the “puzzle game business” since time immemorial, most prominently with crossword puzzles. And here’s the clincher. As Ian Bogost, Simon Ferrari, and Bobby Schweizer wrote in Newsgames: Journalism at Play1 twelve years ago:

Hindsight is 20/20, but the news business hasn’t even bothered to ask itself if the casual games market represents a missed revenue opportunity akin to the lost classifieds business of eBay and Craigslist. Games are probably seen as trifles, and the nation’s publishers would surely not be alone in assuming that dollars spent advertising stuff for sale far eclipses that of little puzzles. The numbers may startle them. eBay’s 2008 revenue weighed in at $2.12 billion. Add in an estimated $80 million in revenue from privately held Craigslist and you still haven’t reached the size of the casual, mobile, and social games market. These games are a real business, one the news industry hasn’t much considered as a partial salve for its financial heartburn.

There were three major reasons why newspapers got in trouble in the Digital Age. One, certainly, was copying and sharing. There’s that famous line from Gordy Thompson, former Manager of Internet Service for the New York Times: “When a 14 year old kid can blow up your business in his spare time, not because he hates youbut because he loves you, then you got a problem.” Then, which is also widely known, readers weren’t exactly used to paying for information on the internet. But what really got newspapers into trouble was when Craigslist and similar services suddenly pulled the rug out from under some of their most vital revenue sources.

Publishers could have foreseen all that and acted accordingly, but they didn’t. And then, in the context of digital and social puzzle games, they left billions of dollars on the table that digital and social media companies were free to pocket. As Ian Bogost put it, the “NYT made Spelling Bee and just sort of…called it a day.”

And, with regard to Wordle, he adds: “What you need is a catalog.”