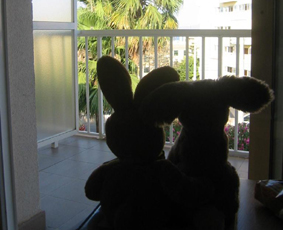 Some personal thoughts on writing and publishing routines, and what to do with them when things begin to crumble.

In the late 2000s and early 2010s, the Werbeblogger was still alive. We had a handful of occasional contributors, but most of the work was done by its partners and editors—originally Patrick and Roland, and after Patrick left, Roland and me. Which was quite a handful. Our blog was the most widely read German-language blog for advertising, marketing, and PR, with a fairly regular Top Ten appearance in the German Blogcharts. And we pumped out a lot of stuff to keep it that way! Usually between three and five blog posts per day, a podcast every other week, commenting and moderating, handling administrative and technical stuff, and attending and covering conferences. On top of that, we assembled a larger team to host and organize the wildly successful remix09 conference, with the lecture halls of the Museum for Hamburg History as its outstanding venue.

And that, mind, wasn’t even our day job!

Thus, I’m used to grueling writing routines that never stop. Nowadays, how much time I spend on revising lectures and grading and sketching research papers to death depends on seasonal workloads. But I have a fairly rigid target of 400–600 words per day for my creative Voidpunk stuff. In addition, I set aside one hour per day for being and staying visible on social media and the internet, with blog posts, tweets, photographs, tumblers, and my weekly newsletter.

It’s a pretty robust schedule that works out most of the time. And even though it can be exhausting, I still get around to enjoying sports, reading & watching & listening to stuff, and playing video games. What generally helps at the moment is the pandemic; not going out and waking up the next day with a steel mill inside your head is surprisingly conducive to keeping up daily routines.

What doesn’t help are events happening in the larger world that are so momentous and so depressing that I just can’t bring myself to up and publish stuff that suddenly feels insignificant, inappropriate, even indulging, when compared to what’s affecting people across the world. That was certainly the case with the orange fascist becoming president in 2016; Xi’s wholesale imperialist “security law” takeover of Hong Kong in 2020; and now Putin’s full-scale military assault on the Ukraine in 2022. (And I haven’t yet factored in the pandemic and the accelerating climate catastrophe.)

As the frequency of terrible events in the world has kicked into high gear during the past years, and with no end in sight, particularly with the future of the U.S. as a democratic state in jeopardy, the question of when to stop publishing what feels like, from one moment to the next, irrelevant fluff, and when to resume will not be going away soon.